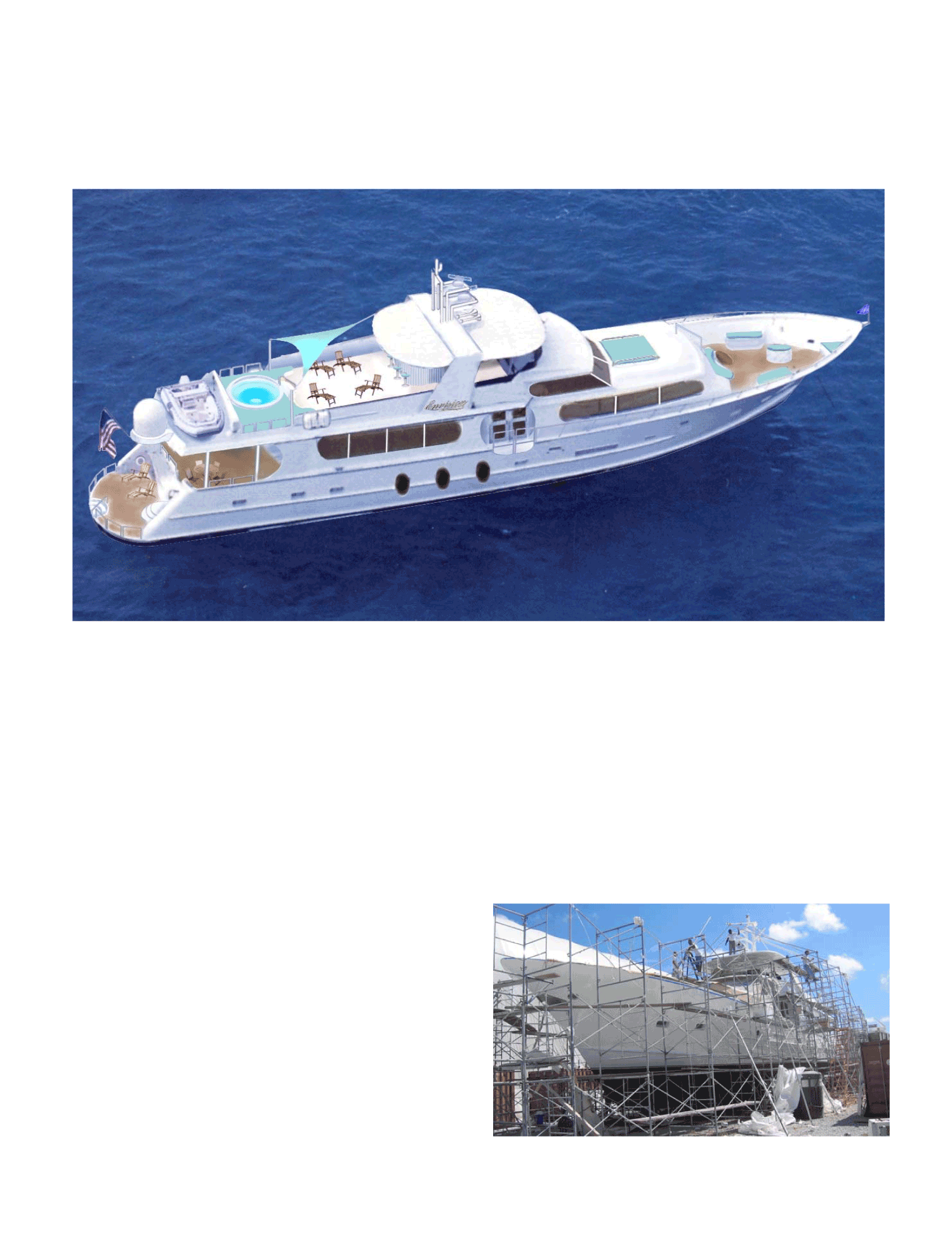 Where Technology Meets the High Seas!

and work began at the Riviera Yacht Center in Riviera

to believe. Step inside, take the tour, and you will really be

in awe. Just what is “Envision”? She is an environmentally

RGF maintains a full staff of over 100 engineers, design-

110′ aluminum motor vessel, is the brainchild of the RGF

bow to aft and mast to keel. The vessel was basically

was founded in 1985 by the owner and CEO Ron Fink. The

stripped to a bare aluminum hull. A 5′ bow extension and a

company has invented over 500 environmental products.

5′ aft stairway to the sea increased her length to 110′. The

RGF’s mission is to provide the world with the safest air,

salon and galley windows were enlarged and softened with

water and food without the use of chemicals. Envision is a

floating showroom of RGF products, and over 50 are in use

was used for safety, soundproofing and reduced solar load.

High density foam core insulation was used to triple the

How was the Envision concept conceived? The RGF

team’s mission was to build the world’s first environment

friendly mega yacht. A keyword in any environmental pro-

gram is sustainability. With that in mind, the team decided

to renovate an older tired aluminum yacht and recycle her

into a world-class enviro-friendly mega yacht.

Lady BeBe was a 100′ Broward charter boat out of

St. Croix, USVI, owned and operated by the owner of BeBe

She was hunkered down for a couple of Florida hurricanes

The RGF team’s mission was to build the 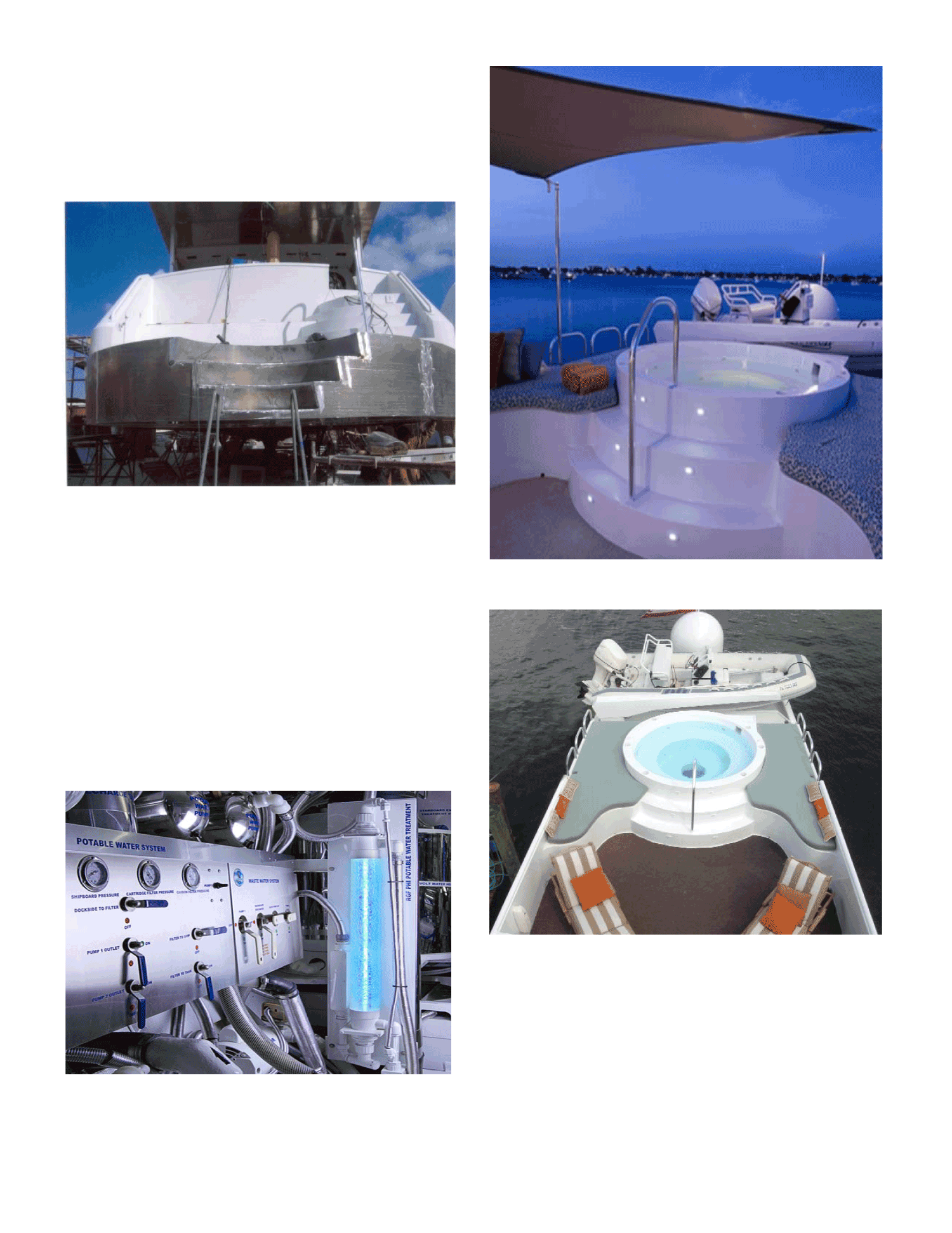 The original wiring was replaced, as was the entire

main electrical panel. Mechanically she was rebuilt from rud-

ders to stabilizers to engines to generators to transmissions.

All new navigation was installed, as well as most controls.

The upper deck was extended 8′ aft to accommodate

an 8′ diameter pool/hot tub with an innovative clear bottom

providing water-diffused sunlight to the lower aft deck during

the day, and a water-diffused light show at night.

Envision’s upper deck extension and Stairway to the Sea

deck. The addition of a radar arch and pipe mast opens the

One of RGF’s technologies is PHI® or Photohydroion-

Upper deck hot tub with the “Thongbrella” shade and

used by most Fortune 500 food processors as a food, air and

water sanitizer, and in many buildings for air purification.

RGF’s PHI® technology is used by the U.S. military and other

of mold, bacteria and Norwalk Virus.

Envision was equipped with PHI®-based systems for

resulting in a mega yacht with the purest air, water, food,

sewage, laundry and bilge in the world. Just step aboard and

Just what does PHI® do for a yacht? First is mold and odor

control, it is gone. Just walk on board, your olfactory will never

deceive you. Second is food safety and shelf life extension: up

to 40% extended shelf life for food treated with PHI®.

Water from the pool/hot tub to the potable holding

tank is crystal clear and pure. Nothing can ruin a soak in a hot

tub like chemicals. The hot water opens your pores and the

bromine or chlorine is readily absorbed into your skin as well

as the hot vapors entering your lungs. This is precisely why

your nose will tell the story, or better yet remove the cap on the

holding tank – no odor, not a cover up, just zero odors. Try the

friendly oxygen based oxidizers to maintain crystal clear and

bilge; again, no odor. The engine room is unbelievably pleas- 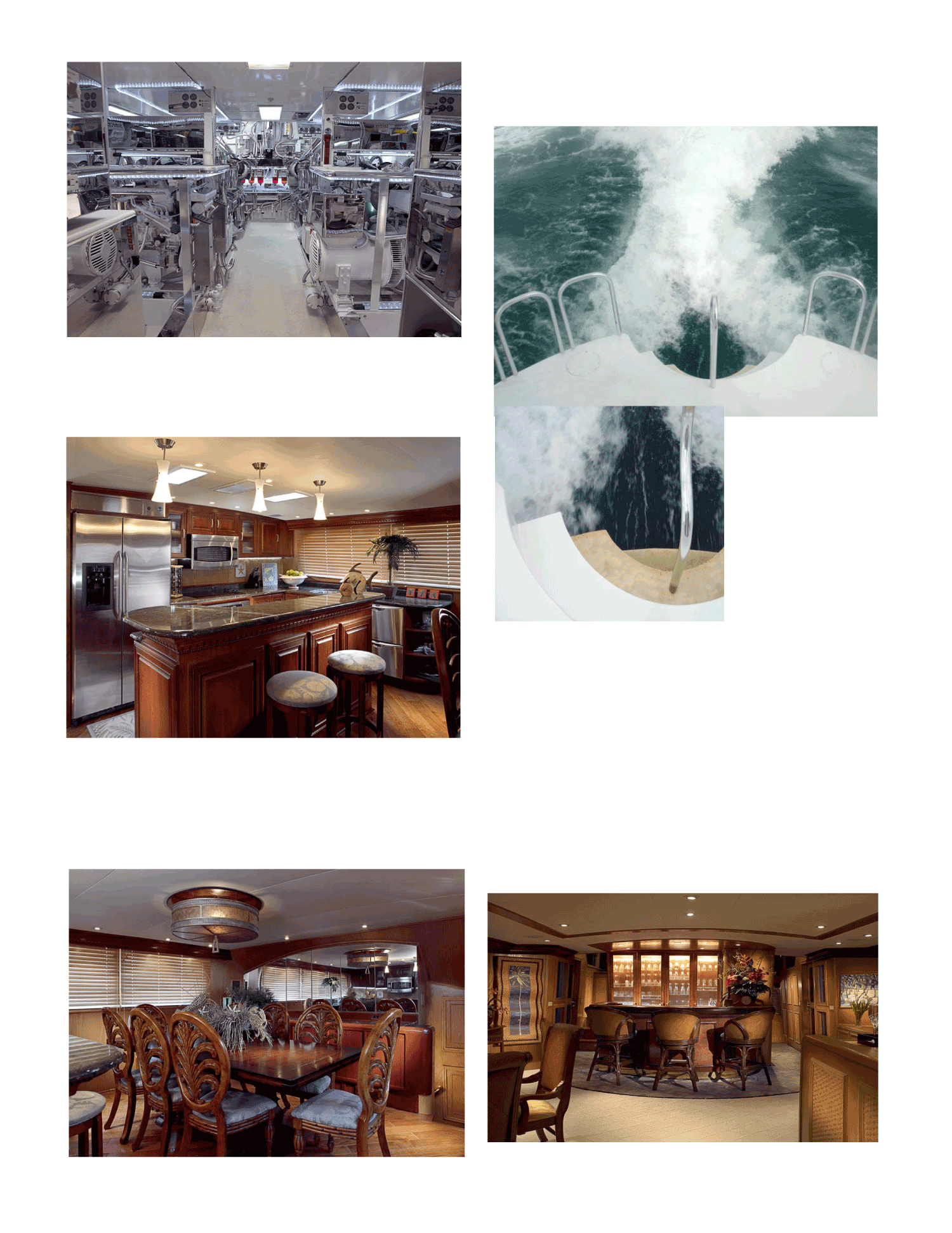 fruits and vegetables which eliminates chlorine and pesticides.

Next is safety. PHI® is not a passive system. It is an

aggressive system that sends out hydro peroxides and hydro

ions into the room, which aggressively kills bacteria, molds,

odors and viruses. Tests show a room with PHI® will kill 78%

during sea trials per-

system that has been

approved by the USDA

and FDA for commercial

PHI® Units are installed in the trash compactor for

odor and bacteria control, and also the ice makers, where

mold and the deadly Listeria bacteria are destroyed. Airborne

cooking grease is broken down to an oxidized white powder

for easy and odor-free disposal. Cooking and grease odors

On laundry day you can forget about those unsightly pollut-

of sneeze germs at three feet. This also includes the dreaded

clothing as well and possibly better than your favorite deter-

Norwalk Virus and SARS. Independent lab tests for the Cruise

gent. PHI gases are injected into the wash and rinse water for

Industry provided a 99.99% kill of the Norwalk Virus.

an eco-friendly wash. Silver ions are added to the fabric for

The galley is equipped with a PHI water system that

injects the activated friendly oxidizers into the water to wash

The door opens…shazam! Everything is white, clean 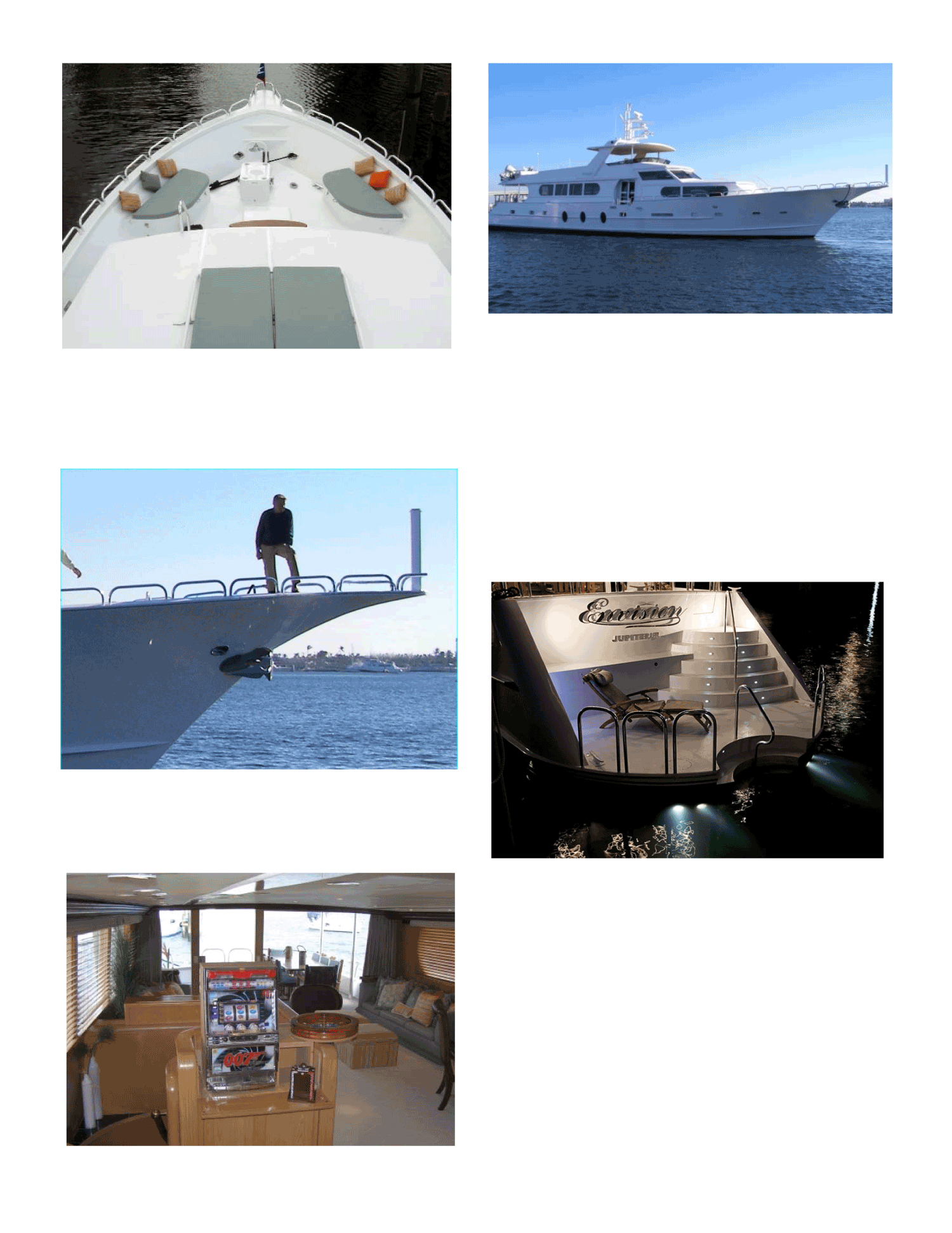 ing tank system eliminated the odors. Envision even has clear

hoses on the pump out system, and although I did not stick

labeled, and there is no odor, no fuel, oil, exhaust, bilge or

around for the show, the Captain assured me it will be a clear,

sewage odor; nothing! The white carpeting really set the

Fuel contamination is a constant battle for diesel pow-

filters, injectors and burns with dirty smoke; not something an

enviro-friendly vessel should have. A PHI Fuel Pure System

tensity light based technology kills 99.99% of the bacteria and

algae. A filter then captures the dead organisms providing

longer fuel life and a cleaner and more efficient engine. By

using an electro/mechanical device you eliminate the tradi-

tank and bilge odors are the culprits.

For Envision’s most impressive act, my RGF host

tional chemical fuel treatments that can effect the sulphur con-

tent of the fuel and possibly cause metallurgical problems.

An RGF US Coast Guard approved Bilge Filter as-

sures no illegal overboard discharge of oily bilge water. The

sewer plants, can be found in each head on the Envision. The

What about efficiency? To be enviro friendly, a product

must be efficient. The re-design of Envision included a rounded

lbs each side. This provides a method of providing perfect bal-

ancing for a more stable and efficient ride. Also, a trim 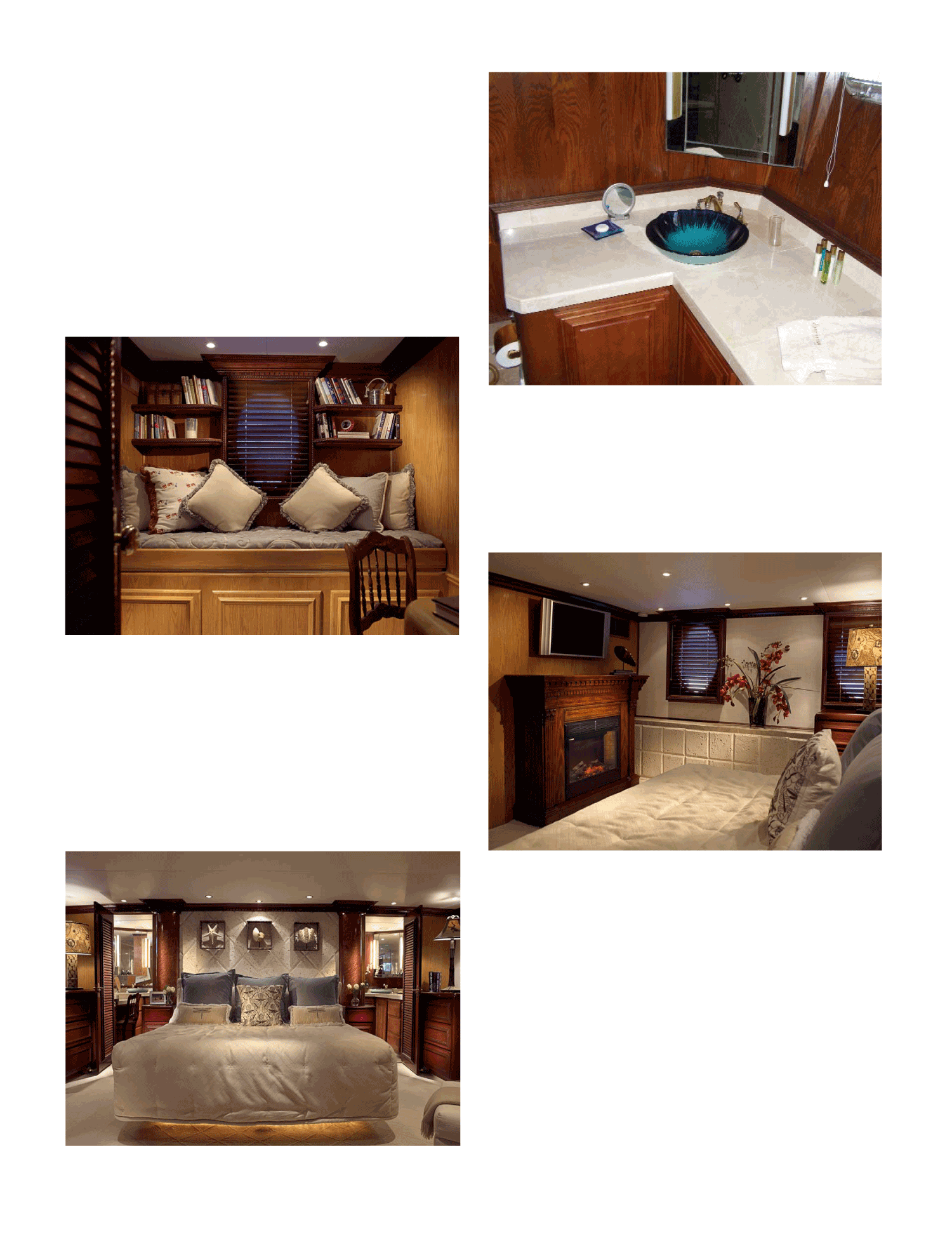 fin was added to prevent back wash at low speeds. This trim

fin turned out to be better than expected. Not only did she trim

out at 1,600 rpm, the entire stairway to the sea was high and

dry. The balancing is credited for her performance: 14 knots at

gallons per hour is environmentally friendly, but for a 110′ ves-

sel it is quite impressive.

Another impressive feature was the lack of exhaust

Smoke Reduction, which is a combination of RGF’s hydrogen

, which reduces the particulate in ex-

haust and destroys many of the gases.

Most people think of chemical pollution of air and water

contamination. There is also visual pollution.

Recognizing the value of a totally unique mega yacht, Sun-

brella Corporation decided to use Envision as a showplace for

their new line of fabric, which includes furniture, cushions, pil-

deck shade, which the RGF team promptly nicknamed a

Step into the master stateroom and your are greeted

with an open airy feeling provided by 4 oversized portholes.

The master stateroom is decorated in marble, granite, coral,

The RGF team was determined to change the profile

into a unique and innovative design. With the aid of CAD,

scores of designs were reviewed, tested and rejected. In the

end, an old-fashioned French curve was used to design the

next to an old slide rule in the back of a very old desk draw.

A just for fun casino was installed consisting of gen-

“visual pollution”, the casino was built onto a disappearing lift

sea glass and 9 different woods and veneers. Over 20 species

of woods and veneers were used onboard. All exotic wood

were purchased through World Panel Products Inc. which as-

sures that all the exotic species were farmed and proccesed

to avoid deforestation of our environmentally sensitive rain-

forests. the master also has an environmental friendly fire-

place for those “cold” south Florida nights. Needless to say

flame to be sure its not real. The master head is equipped with

shower. The sink is molded colored glass that perfectly

matches the deep purple sea color of the Atlantic meeting the

shallow turquoise water of the Bahama Bank just off West

parently they live off our dead skin which is constantly flaking 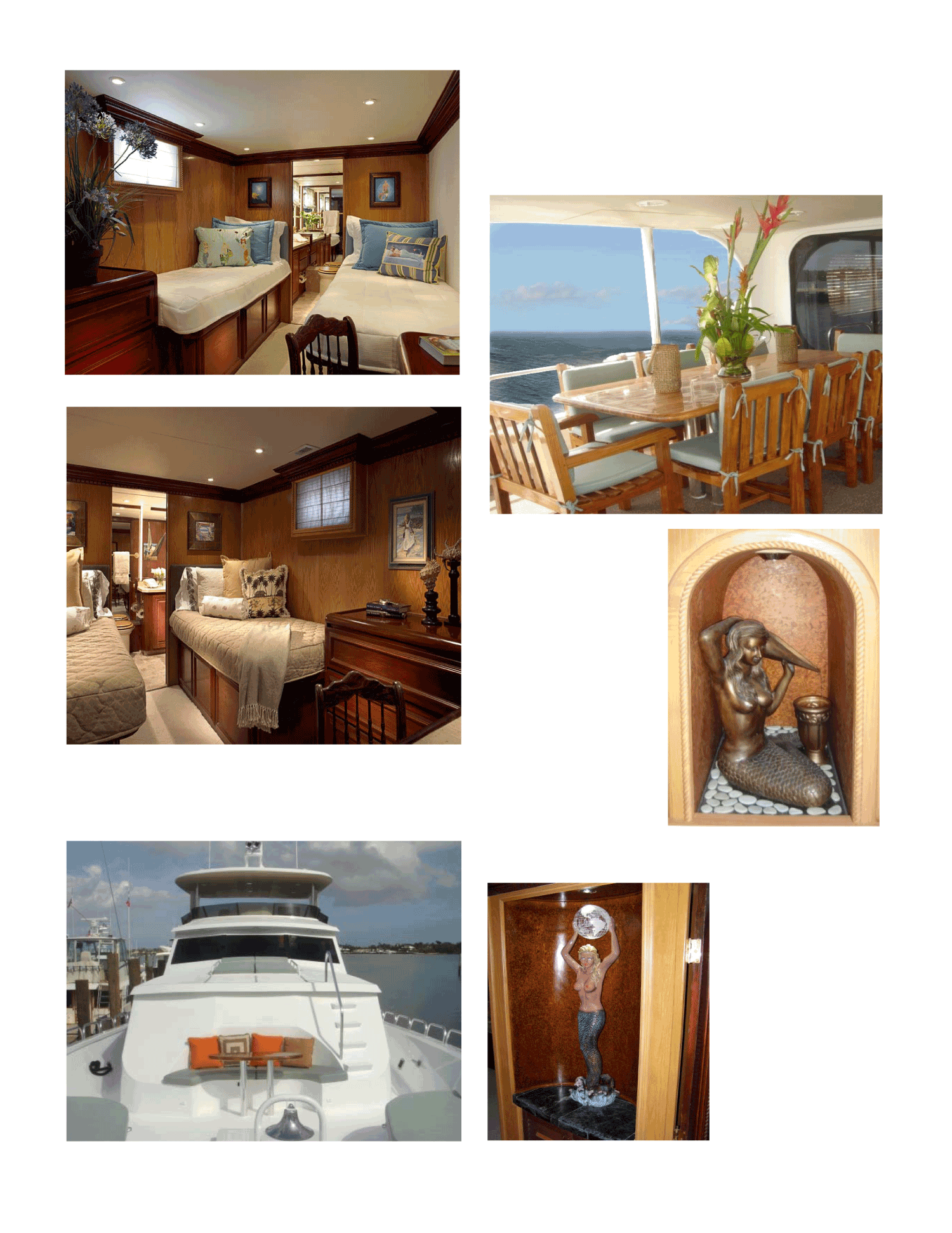 the master king size is also an oversized custom made 15”

the other starboard, are equipped with all the amenities of a

and of course the purest

air possible. A redesign of

the lower deck included a

library with an over sized

and more of an open feel.

The library includes a wet

and converts to a double

off, a pleasant thought! The dust mites themselves aren’t the

for an underwater lighting

vate allergies. Traditional mattresses can have 2/3 of it’s

and video system. The

with some challenges. First

was the rounded stern swim platform and second was suitable

commercially available aluminum housings. One of the advan-

tages of having a first

is you simply design, en-

stall your own. Four

were installed and work

Even the powder room

wood door. In addition a 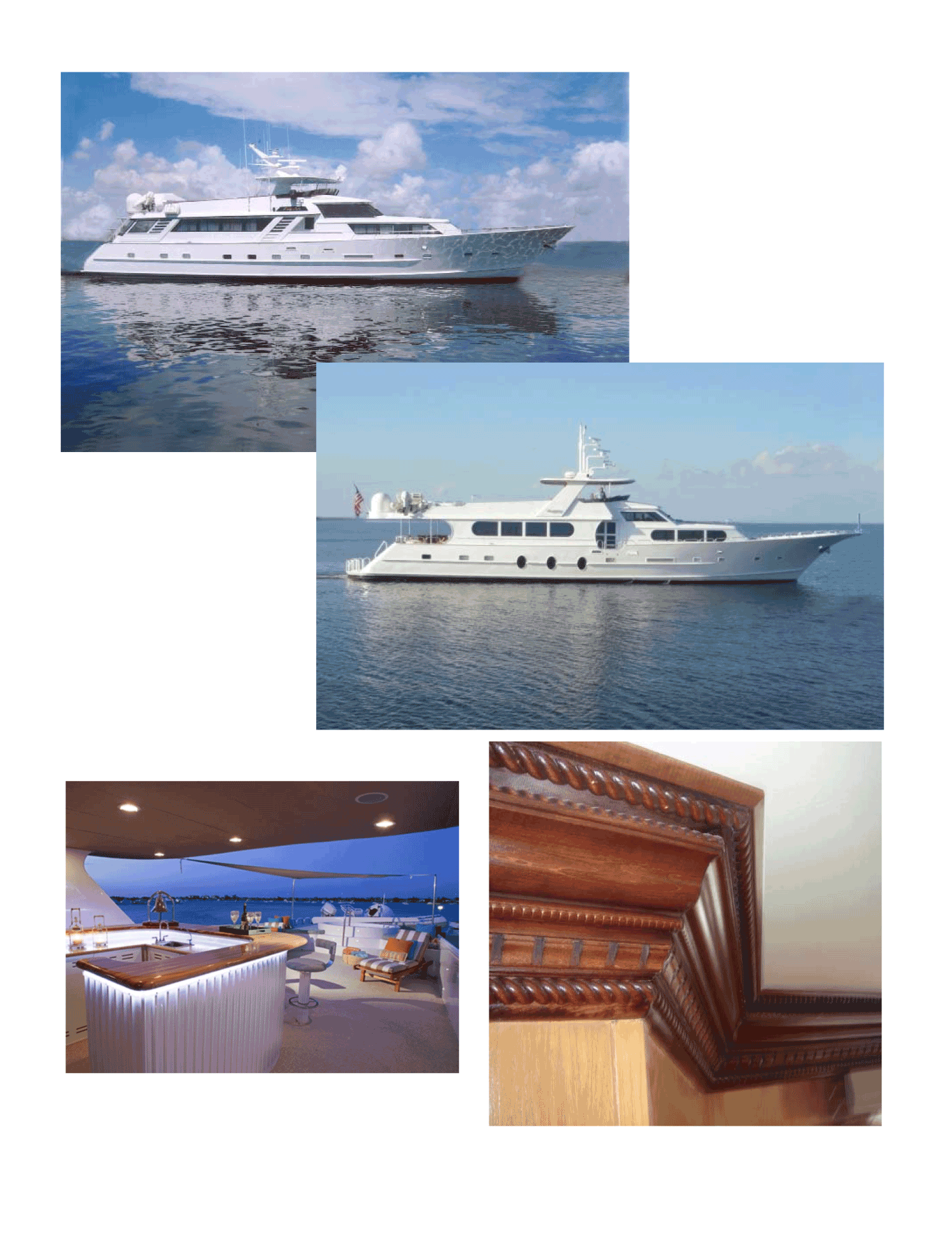 virovision is a realistic, practical ap-

proach that helps preserve all our nat-

energy. The concept, developed by

food. The process encompasses a

with conservation for a total eco

rants are embracing this program. The

benefits include a safer environment;

Bacteria System is built into the head

eliminating the need for a noisy ex-

signed and fabricated by RGF, is found

throughout…even in the helm. The

salon crown molding consists of 12 in-

dividual pieces and includes a low

noise and draftless heating and air

ported a container of farmed teak for

many teak projects. Teak is laminated

and clearcoated in the massive 8’ x 8’

and the bow cocktail area features a

Every available space was

nation and recirculation pump which feeds water to her shell

providing a pleasant water feature at the port entrance. 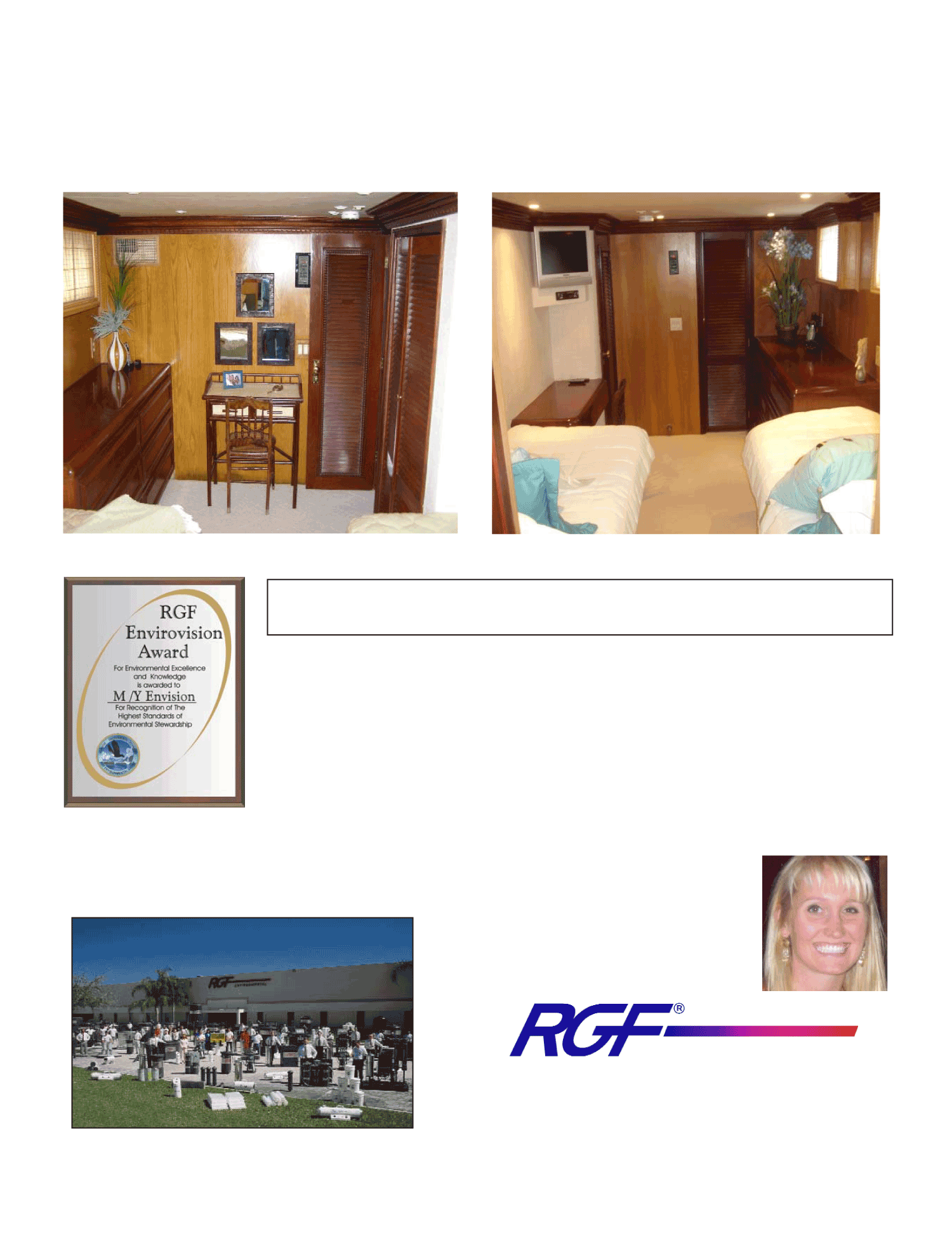 The formality of some mega-yachts can be intimidating. Aside

from being environmentally friendly, a visit to this mega-yacht

ployee sick time, all resulting in improved public image and

will leave you with a fresh and easy feeling, and a level of

enhanced quality of the overall facility.

comfort that makes you want to return for another breath of

“EnviroVision is a realistic, practical approach to provide a vessel with the purest

possible water, air and food without the use of chemicals.”

EnviroVision is a realistic, practical approach that helps preserve all our natural resources: water,

air, food and energy. The concept, developed by RGF Environmental Group, provides a facility with

sors, and restaurants are embracing this program. The benefits include a safer environment; lower

reduction of employee sick time, all resulting in improved public image and enhanced quality of

is a freelance writer from Burleigh

Heads on the Gold Coast of Australia.

Devon holds a journalism degree from