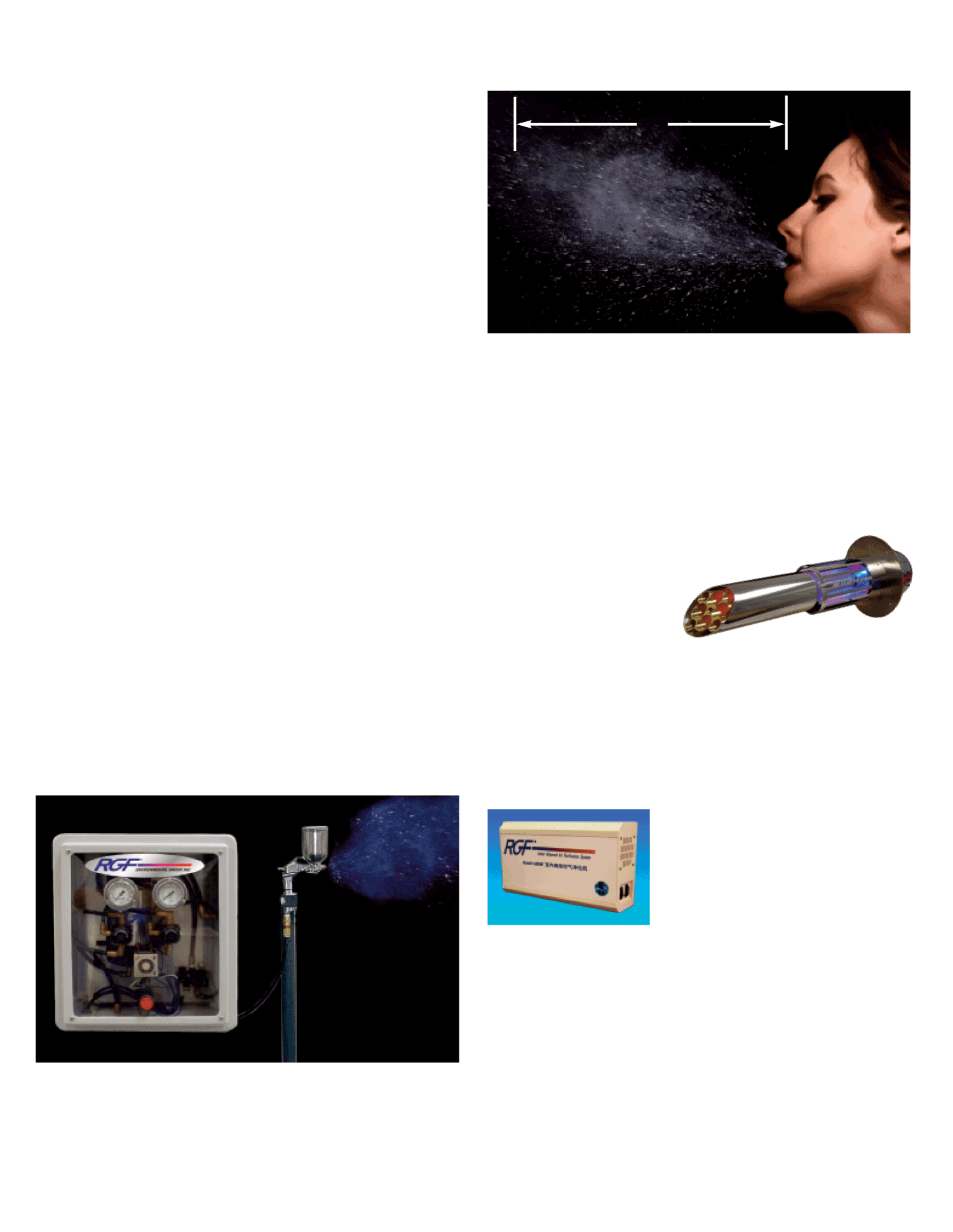 In theory, a terrorist could aspirate a virus easily on an air-

liner, in a terminal or any commercial building simply by plac-

ing a virus in a small hand activated asperator readily

nasal spray bottle. No one would know until the next day

after they have traveled and spread the virus. This is how

worldwide pandemics can get started. This concept was dis-

covered by Sandia National Labs while working with RGF

Environmental Group on a homeland security project for a

Kill rate of virus and bacteria

creates an airborne plasma, which is distributed

another person. The problem was how do you do that? RGF

Environmental Group has been working with Advanced Ox-

being those found in nature that return to oxygen and water

after they oxidize, such as hydroperoxides. The process is

having the ability to kill an airborne virus, from a sneeze or

drogen peroxide. A series of tests were conducted by

asperator, within three feet. The next problem was how do

you validate the results? The validation had to be in a bio

test chamber and had to be repeatable. Now, how do you

were outstanding with a kill

duplicate a sneeze? No two people sneeze alike or not even

the same person could duplicate his or her own sneeze. A

high-tech sneeze/asperation machine was needed. Of

course, there was no such thing, so RGF developed one.

When you sneeze, you evacuate one lung of air volume. You

Oxidation plasma making it far more effective on a broader

expel about one gram of fluid at about 100 miles per hour.

machine with controls for volume, fluid and speed. Now it

During the SARS scare a few years

ago, the Chinese Government in-

Cells in city buses and subways

after determining it killed the deadly

nology for use on China’s buses and subways.

The breakthrough in the RGF Advanced Oxidation tech-

nologies is a group of oxidants known as Hydroperoxides.

Hydroperoxides have been a common part of our environ-

ment for over 3.5 billion years. Hydroperoxides are created

was possible to duplicate a sneeze/asperation allowing a re-

in our atmosphere whenever three components are present:

peatable method of testing the effectiveness of RGF’s Ad-

also has the ability to super charge these hy- 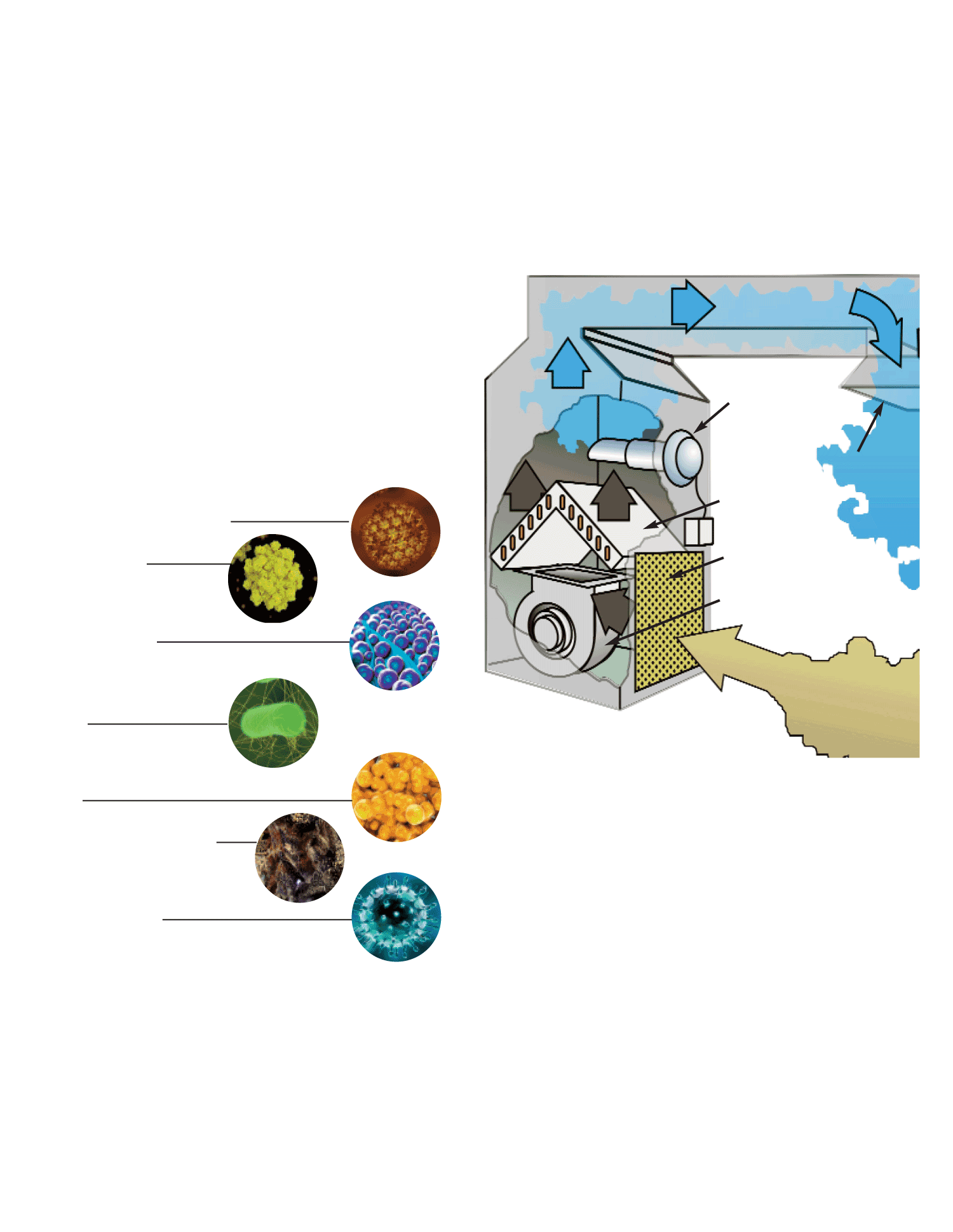 Ionized-Hydro-Peroxides™ are very effective at destroying

There is no known case of hydroperoxides ever creating a

harmful microbials in the air and on surfaces. As oxidants,

health risk. Considering we have been exposed to hy-

they do this by either destroying the microbe through a

droperoxides in nature since the day man stepped on the

process known as cell lysing or by changing its molecular

planet, it is a reasonable assumption that hydroperoxides do

structure and rendering it harmless (which is typically the

not constitute a health risk. Over the past 25 years, RGF has

case in VOC’s and odors). The amount of hydroperoxides

more than one million Advanced Oxidation products which

required to accomplish this task in a conditioned space is

have been used successfully worldwide without a safety

below the level that is constantly in our outside air. The Ad-

in the outside air into the indoor conditioned air. One of the

best features of Ionized-Hydro-Peroxides™ is that as they

settle out of the air, they disinfect surfaces. This was vali-

dated in a Kansas State University Bio Chamber on stainless

steel surfaces, resulting in a 99+% kill on numerous viruses

who has conducted research on Advanced Oxidation Technology for the

past 15 years. He has authored numerous articles and holds many

99+% reduction on stainless steel surface in a Kansas

Mr. Fink holds a BSME and has been active in Nuclear Weapon detection

for the DIA Defense Intelligence Agency and Nuclear Power Industry.

He holds numerous patents and authored over 70 articles.

cialist in Advanced Oxidation. He has authored several published

technical papers and has numerous patents.