Stories From The Field 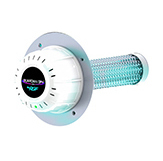 Jeff, territory sales manager for Century AC Supply in Houston, TX., installed 2 Guardian Air units 2 years ago. After the installation, his whole family noticed a considerable difference. There was a “clean” smell throughout the whole house. No more odors in the house. After installing the units, the kids have not been sick for 2 years. Jeff could not be happier since installing the Guardian Airs.

“clean” smell throughout the whole house

The IRS Center in downtown Austin, TX installed 80 units in their entire facility. They were concerned about improving employee morale and reducing sick time and installing Guardian Air units in their facility to drastically improve IAQ seemed like the perfect solution. They plan on examining employee sick time in the year before installation and the year after to determine how much the improvement air quality helped. We can already confirm the employees really appreciate the fresh feeling to the air.

The Lima Memorial Hospital located in Lima, Ohio has installed Guardian Air units throughout their entire facility, which covered the ICU, operating rooms, waiting rooms, and separate wings of the hospital. This is a three-phase project: In the first phase they installed over 40 units to help combat some odor problems, help prevent the spread of viruses and bacteria, and improve the Indoor Air Quality as whole in their main facility. The second phase covers some of the doctors’ offices and private sectors of the facility. Just recently the facility manager from Lima had called to discuss future possibilities in their sister hospital third phase. He expressed how happy he and the Lima staff were at the results the Guardian Air and the PHI technology has provided them with their IAQ issues. There are over 200 units being installed in all three phases, which should be completed sometime in 2010.

A medical office building in Colorado approached us with an interesting application. They were using bag filters to achieve a specific level of particulate filtration as specified by their building designers. The bag filters cost them over $30,000 a year to replace and maintain. They also require huge amounts of energy from the fans to keep forcing the air through the filters.
We brought up the idea of using REME and MERV 13 filtration to achieve the same results without the high cost of the bag filters and the energy costs from excessive fan power. After inspecting the building plans, they want to go with two REME-HO rack systems with eight units in each giving them effective coverage up to 160,000 CFM. The fifth floor will have its own REME-HO rack system with four units. They’re expecting to save over $15,000 a year in filter and energy costs.

A medical office building in Colorado

A couple in Magnolia, Texas, remodeled their home including cabinets and floors. After a few days they called their contractor about the odor. When the contractor arrived at the home he started getting a headache after only five minutes. He immediately installed 3 REME units as that is the number of units that were on their house. The lady returned after 5 hours to discover the odor was completely gone.
As a follow up to this story, the couple ultimately got a divorce and when the lady moved into her new home she immediately called the contractor to get the REME installed in her new home. She is a nurse and her ex-husband is a doctor. They both recommend the REME to everyone they meet.